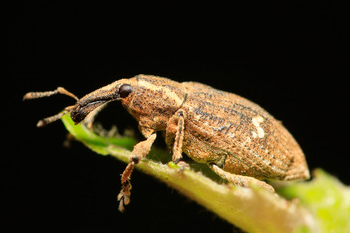 Adults spend the winter in the leaf litter under or near host trees. On warm spring days they fly or crawl to the leaders of suitable hosts, usually during the period from mid-March through April. Most feeding by adults is done within 25 cm of the terminal buds. From mid-April through early May, females mate and each deposits one to five eggs in feeding wounds. Hundreds of eggs may be deposited in one terminal leader. The eggs hatch in about seven days. When the terminal is heavily infested, larvae feed side by side in a ring encircling the stem. They feed downward on the inner bark of the leader. Larvae reach maturity in mid- to late July and pupate in the infested terminal. The pupal chambers called “chip cocoons” are filled with shredded wood and can be found inside the terminal at this time. Adults emerge in 10 to 15 days through small holes at the base of the dead terminal of the host plant, usually in late July and August. During this time feeding by adults is not considered important since little is done before they enter the leaf litter to overwinter. The white pine weevil has one generation per year.

The adult is a small rust-colored weevil that is about 4-6 mm long. It has irregularly shaped patches of brown and white scales on the front wings. Near the apex of the front wings is a large white patch. Like most weevils, the adult has a long snout-like beak from which small antennae arise. The larval stage, which lives beneath the bark, is white with a distinct brown head. When mature, the larva is approximately 7 mm long, legless, and slightly C-shaped.

The first symptom evident from successful attack by this pest is glistening droplets of resin on terminal leaders of the host plant in late March and April. This is the result of punctures made by adults in the process of feeding and cutting egg-laying sites.

Injury to Eastern White pine and some species of spruce is usually confined to the previous year's terminal leader. Damage on Scots pine and Colorado Blue and Serbian spruces often extends downward through two or three year's growth. The good news is infested trees are seldom killed.

Most damage is done by the larval stage. Larvae are found just under the bark of infested terminals from May through July. Larvae chew and burrow completely around the stem causing the current year's growth to wilt, droop, and eventually die. One or more side branches (laterals) may then bend and grow upward to take over as the terminal leader. At this point the tree is now permanently crooked. For several years after successful attack by this pest, a few more laterals may grow as leaders. This condition may result in a forked tree.