Outdoor nests near human activity can pose a potential problem. Some wasps may become aggressive scavengers around human food and are attracted to outdoor activities where food or drinks are served. Most bees and wasps will not attack if left alone. However, stinging insects like bees, wasps, and hornets send more than 500,000 people to the emergency room each year. These pests are especially active during the second half of summer and early fall when the colonies forage for food that will sustain their queens during the winter.

If a family member is allergic to a bee and is stung, the reaction might be serious enough to warrant that trip to the hospital. A bad reaction can occur even if the allergy had previously been non-existent or mild. Also, an individual's allergy can worsen after repeated exposure to stings. Multiple stings can be quite dangerous, especially with regard to the elderly or small children. Regardless, bee or wasp stings hurt even without an adverse allergic reaction. If you find a stinging insect nest on your property, contact us and we will be able to inspect your home, confirm the type of stinging insect, and recommend a control treatment. 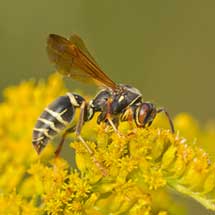 Paper wasps get their common name from the paper-like material out of which they make their nests. Paper wasps are sometimes called umbrella wasps, after the shape of their distinctive nests. Paper wasps hang their comb nests from twigs and branches of trees and shrubs, porch ceilings, the tops of window and doorframes, soffits, eaves, attic rafters, deck floor joists and railings, etc.

While not an aggressive species by nature, paper wasps will sting if they are disturbed or their nest is threatened. Wasp stings are painful and can cause the same risk of allergic reaction as other insect stings.

Paper wasps are 3/4 to 1 inch long, slender, narrow-waisted with smoky black wings that are folded lengthwise when at rest. Body coloration varies with species: Polistes exclamans is brown with yellow markings on the head, thorax and bands on the abdomen; Polistes carolina is overall reddish-brown.

Paper wasps should not be confused with yellowjackets (Vespula squamosa Drury) and baldfaced hornets (Dolichovespa maculata (Linnaeus)). Paper wasp nests are open and cells are not covered with a cap (in an envelope). Paper wasps are semi-social insects and colonies contain three castes: workers, queens and males. Fertilized queens, which appear similar to workers, overwinter in protected habitats such as cracks and crevices in structures or under tree bark. In the spring they select a nesting site and begin to build a nest. Eggs are laid singly in cells and hatch into legless grub-like larvae that develop through several stages (instars) before pupating. Cells remain open until developing larvae pupate. Sterile worker wasps assist in building the nest, feeding the young and defending the nest. A mature paper wasp nest may have 20 to 30 adults. In late summer, queens stop laying eggs and the colony soon begins to decline. In the fall, mated female offspring of the queen seek overwintering sites. The remainder of the colony does not survive the winter. 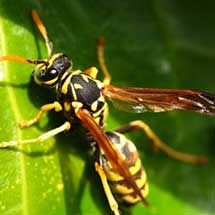 Yellowjacket is the common name in North America for predatory wasps of the genera Vespula and Dolichovespula. Members of these genera are known simply as "wasps" in other English-speaking countries. Most of these are black and yellow like the eastern yellowjacket Vespula maculifrons and the Saxon wasp Dolichovespula saxonica; some are black and white like the bald-faced hornet, Dolichovespula maculata. Others may have the abdomen background color red instead of black. They can be identified by their distinctive markings, their occurrence only in colonies, and a characteristic rapid and side-to- side flight pattern prior to landing. All females are capable of stinging. Yellowjackets are in fact important predators of pest insects.

There are several species of yellowjackets. These flying insects typically have a yellow and black head, face, and patterned abdomen. Yellowjackets can be found anywhere humans are found. They build paper carton nests out of chewed up cellulose, which is usually found in the ground or in cavernous areas such as eaves and attics. Yellowjacket stings pose significant health threats to humans as they are territorial and will sting if threatened. They are known to sting repeatedly and can cause allergic reactions.

Yellowjackets are social hunters living in colonies containing workers, queens, and males (drones). Colonies are annual with only inseminated queens overwintering. Fertilized queens are found in protected places such as in hollow logs, in stumps, under bark, in leaf litter, in soil cavities, and man-made structures. Queens emerge during the warm days of late spring or early summer, select a nest site, and build a small paper nest in which they lay eggs. After eggs hatch from the 30 to 50 brood cells, the queen feeds the young larvae for about 18 to 20 days. Larvae pupate, and then emerge later as small, infertile females called workers. Workers in the colony take over caring for the larvae, feeding them with chewed up meat or fruit. By midsummer, the first adult workers emerge and assume the tasks of nest expansion, foraging for food, care ofthe queen and larvae, and colony defense. 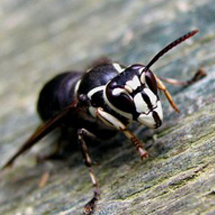 Bald-faced hornets are social insects, although not true hornets. They live in colonies that may contain between 100 and 400 members at their peak. They usually appear in late summer when populations are largest. Unlike other stinging insects, bald-faced hornets do not reuse their nests season after season. Bald-faced hornets build paper nests at least three or more feet off of the ground, usually in trees, shrubs, overhangs, utility poles, houses, sheds or other structures. These nests can be as large as 14 inches in diameter and more than 24 inches in length.

Baldfaced hornets are distinguished from other stinging insects by their white and black coloring. They have a white or "baldfaced" head, which is the source of their colloquial namesake. These wasps also have three white stripes at the end of their bodies. They are notably larger than other species of Dolichovespula, as adults average about 19 millimeters (0.75 in) in length. Queen and worker wasps have similar morphologies. However, workers are covered by small hairs while the queen remains hairless. Queens are always larger than workers in their colonies, though size distributions can vary in different nests and workers in one colony might be as large as a queen in a different one. Bald-faced hornets are omnivorous and are considered to be beneficial due to their predation of flies, caterpillars, and spiders. However, their aggressively defensive nature makes them a threat to humans who wander too close to a nest or when a nest is in areas inhabited by humans. They vigorously defend the nest, with workers stinging repeatedly, as is common among social bees and wasps.

Each spring, queens that were born and fertilized at the end of the previous season begin new colonies. A queen selects a location for its nest, begins building it, lays a first batch of eggs and feeds this first group of larvae. These become workers and assume the chore of expanding the nest. They chew up wood which mixes with a starch in their saliva. They then spread it around with their mandibles and legs and it dries into a papery structure. The workers guard the nest and feed on nectar, tree sap and fruit pulp (particularly that of apples). They also prey on insects and other arthropods, chewing them up and feeding them to the larvae. They have been known to scavenge raw meat. In late summer and early fall, the queen begins to lay eggs which will become drones and new queens. After pupation, these fertile males and females fly off to mate. Fertilized queens then overwinter and start new colonies the next year. Males and workers die in the end of the cycle. The old queen, if not killed by workers, dies with them around mid-autumn. 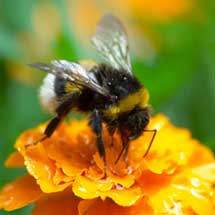 Bees are flying insects closely related to wasps and ants, known for their role in pollination. In the case of the best-known bee species, the European honey bee, they are known for producing honey and beeswax. Bees are a monophyletic lineage within the superfamily Apoidea, presently considered as a clade Anthophila. There are about 20,000 different species of bees in the world. Bees live in colonies that contain the queen bee, the worker bee and the drone. The worker bee and the queen bee are both female but only the queen bee can reproduce. All drones are male. Worker bees clean the hive, collect pollen and nectar to feed the colony, and take care of the offspring. The drone’s only job is to mate with the queen. The queen’s only job is to lay eggs.

Bees store their venom in a sac attached to their stinger and only female bee’s sting. That is because the stinger, called an ovipositor, is part of the female bee’s reproductive design. A queen bee uses her ovipositor to lay eggs as well as sting. Sterile females, also called worker bees, don’t lay eggs. They just use their ovipositors to sting. Bees see all colors except the color red. That and their sense of smell help them find the flowers they need to collect pollen. Not only is pollen a food source for bees, but also some of the pollen is dropped in flight, resulting in cross pollination. The relationship between the plant and the insect is called symbiosis.

Bees range in size from tiny species only 2 mm (0.08 in) in length to rather large insects up to 4 cm (1.6 in) long. Many bees are black or gray, but others are bright yellow, red, or metallic green or blue.

The life cycle of a bee, be it a solitary or social species, involves the laying of an egg, the development through several molts of a legless larva, a pupation stage during which the insect undergoes complete metamorphosis, followed by the emergence of a winged adult. Most solitary bees and bumble bees in temperate climates overwinter as adults or pupae and emerge in spring when increasing numbers of flowering plants come into bloom. The males usually emerge first and search for females with which to mate. The sex of a bee is determined by whether or not the egg is fertilized; after mating, a female stores the sperm and determines which sex is required at the time each individual egg is laid. Fertilized eggs produce female offspring and unfertilized eggs produce male offspring.