Wood-boring insects are among the most destructive pests of ornamental trees and shrubs. Most borers are the larvae (immature stages) of certain moths and beetles. They tunnel and feed under the bark in living wood, destroying water- and sap-conducting tissues. This causes girdling, branch dieback, structural weakness, decline and eventual death of susceptible plants. Infestation sites also provide entry points for plant diseases.

Clearwing and Flatheaded borers are the main types that attack woody ornamentals. The groups differ somewhat in their habits and host preferences, which can affect the approach for controlling them with insecticides. The key to controlling these pests is to keep plants healthy and, when treating with insecticide spray applications timing is critical. The best option is micro tree injection or soil drench with specific timed spray applications.

Borers rarely infest healthy plants growing in their natural environments. However, when trees or shrubs are transplanted into the landscape, stresses such as drought, soil compaction, sun scald, or injuries can weaken them and make them more susceptible to attack. Adult borers may locate suitable egg-laying sites by responding to volatile chemicals that emanate from stressed trees.

Adult borers emerge from infested trees in the spring or summer. After mating, the females fly to a suitable host and lay eggs on the bark, often in crevices or around wounds. Hatching occurs about 10 – 14 days later. The young larvae quickly tunnel beneath the bark where they feed and grow. Once inside the tree, borer larvae are no longer vulnerable to insecticide sprays and are seldom detected until serious damage has been done.

Several species of Clearwing and Flatheaded borers can infest landscape plants. While some are attracted to a range of hosts, most attack only certain kinds of trees and shrubs. It is important to know when the adults of each species are active and which plants are vulnerable in order for treatment to be effective.

Types of Flathead Borers Most Commonly Found in Southeast Idaho 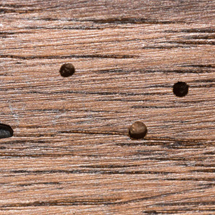 These adults are distinctive dark metallic green beetles that are about 1/2 long and about 1/8 inches wide. This invasive insect, which has killed hundreds of millions of ash trees in North America, was discovered in Kentucky in 2009. The larvae feed on the inner bark of ash trees from June through October, disrupting the tree's ability to transport water and nutrients. Unless protected, infested trees usually die within 4 to 7 years of attack. All native ash species are susceptible to attack. The insect has been found recently in white fringetree (Chionanthus virginicus).

Ash trees can be protected from attack by this devastating insect by:

This is a severe pest of white or paper birch trees in the landscape. Symptoms include twig and branch dieback starting in the upper 1/3 of the tree. With successive years of attack, the tree becomes progressively weaker until it dies. Dead or dying limbs will have numerous D-shaped adult exit holes, each about the size of a BB shot. Adult bronze birch borers are slender, olive-bronze beetles about ½-inch long.

is a severe pest of small, stressed landscape trees, especially flowering crab apples, hawthorns, and maples during the first year or two after they are transplanted. This borer may attack almost any hardwood tree that is stressed by defoliation, sun scald, drought, soil compaction, or mechanical injury. This borer makes broad winding tunnels under the bark, destroying the phloem, cambium, and outer xylem. The full-grown larva is about an inch long, legless, and yellow-white. A single borer can girdle and kill a small tree.

Stressed trees and shrubs tend to be more susceptible to borer infestation, so plant health care is the first line of defense: