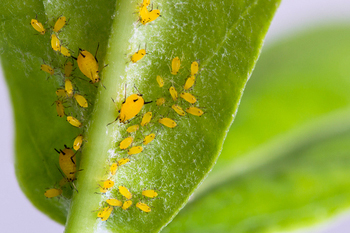 Aphids are small, soft-bodied insects with long slender mouthparts that they use to pierce stems, leaves, and other tender plant parts to suck out fluids. Many species are green but other commonly occurring species may be white, wooly, black or colorless. Aphids have antennae with as many as six segments. They vary in length from 1 to 10 millimeters.

Aphids have many generations per year and reproduce asexually throughout most, if not all of the year, with adult females giving birth to live offspring. When the weather is warm, many species of aphids can develop from newborn nymph to reproducing adult in seven to eight days. Because each adult aphid can produce up to 80 offspring in a matter of one week, aphid populations can increase with great speed.

Aphids are among the most destructive insect pests on cultivated plants and may transmit viruses from plant to plant on certain vegetable and ornamental plants. Many species of aphids cause the greatest damage in late spring. Nymphs and adults feed on plant juices, attacking leaves, stems, buds, flowers, fruit, and/or roots, depending on species. They most especially like succulent or new growth. Some, such as the green peach aphid, feed on a variety of plants, while others, such as the rosy apple aphid, focus on one or just a few plant hosts.

The spruce aphid is a small, green, soft-bodied insect about 1 to 1.5 mm in size. Both winged and wingless forms occur. Spruce aphids feed by inserting their needle-like mouthparts into host foliage and sucking the sap from the needles. First symptoms of feeding are yellow patches on the needles. If the population increases, discoloration intensifies and affected needles turn brown and drop prematurely. Like other aphids, the spruce aphid bears live young with females producing females. Nymphs mature within 3 weeks. During favorable years, large colonies develop during the winter and feed during mild periods. Populations reach a low point during the summer and may be very difficult to find. In the fall, aphids may reappear and begin feeding on the current year’s foliage. Greatest population increases generally occur from late winter into early spring in northwestern North America. In colder climates, overwintering occurs in the egg stage. Defoliation is usually partial, but in some outbreaks the trees are completely defoliated. Heavy defoliation can result in tree mortality.

The woolly apple aphid differs from other apple aphids in appearance, life cycle, and the type of damage inflicted. A colony appears as a cottony mass generally clustered in wounds and pruning scars on the trunk and branches of the tree. The aphids themselves are purplish in color surrounded by white, cottony, thread-like secretions. Woolly apple aphid is a sucking insect pest that weakens the tree by feeding on limbs and roots. It gets its name from the woolly appearance of its colonies.

There are various types of insecticide applications that can be used to control aphids. One of our most effective treatments is our soil drench application. For best results, late fall or spring is the best time for this application.