Ants are among the most prevalent pests in our homes, restaurants, and businesses. They invade just about everywhere they find food and water. There are more than 12,400 species of ants throughout the world.

Egg: Ant eggs are oval shaped and tiny (they are on the order of 1 mm long) but the queen's egg is many times larger.

Larva: The worm-like larvae have no eyes and no legs; they eat food regurgitated by adult ants. The larvae molt (shed their skin) many times as they increase in size.

Pupa: After reaching a certain size, the larva spins a silk-like cocoon around itself (against a solid object, like the wall of the chamber) and pupates. During this time the body changes into its adult form.

Adult: The pupa emerges as an adult. The entire life cycle usually lasts from 6 to 10 weeks. Some queens can live over 15 years and some workers can live for up to 7 years.

Ants belong to the insect order Hymen¬optera and are close relatives of bees and wasps. Ants are easily recognized in their wingless adult forms, known as workers. However, winged forms of ants, which leave the nest in large numbers in warm weather to mate and establish new colonies, are often mistaken for winged termites, which also leave their nests to mate. Ants and termites can be distinguished from one another by three main characteristics:

They could be, especially in large numbers. They carry bacteria that might be transferred to food or an open wound. Various disease-causing organisms—including E. coli, Streptococcus, Shigella, Salmonella and Staphylococcus (many of which are found in feces)—have been found on some species of ants, especially in developing countries. But there’s no evidence that this is a significant risk in the U.S.

Our Most Common Ants in Idaho 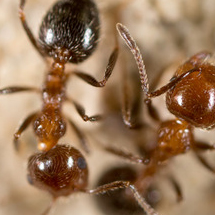 These ants are dark brown to shiny black and are 1/8 inch long. They also emit a very strong odor when crushed. Often found in shallow mount of soil, invade grass areas around water pipes, heat vents and wall voids. They feed on sweets and proteins.

These ants are brown to black and are 3/16 inch in length. They are often found in lawns, cracks in sidewalks and concrete driveways. Other areas are along foundations, near water, and under rocks and boards. They feed on sweets, proteins, and grease. 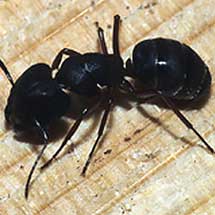 These ants are large, black, or bicolored red and black. They measure up to 1/2 inch long. They are often found in hollow trees, logs, telephone poles, posts, porch pillars and other timber used in homes. Their trademark is a small pile of coarse sawdust beneath their nesting site. Carpenter ants differ from termites because they do not consume wood, but simply hollow it out to form nests.

Carpenter ants damage wood by excavating and creating galleries and tunnels for their nest. These areas are clean, i.e. they do not contain sawdust or other debris, and are smooth, with a well sanded appearance.

The damage to wood structures is variable. The longer a colony is present in a structure, the greater the damage that can be done. Structural wood can be weakened when carpenter ant damage is severe. 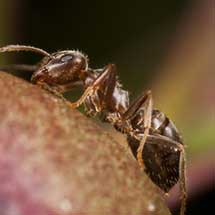 Pharaoh workers are about 1/16-inch in length. They are light yellow to reddish brown in color with a darker abdomen. Pharaoh ants have become a serious pest in almost every type of building. They can feed on a wide variety of foods including grease, sugary foods, and dead insects. They can also gnaw holes in silk, rayon and goods. Nests can be very small, making detection even more difficult. They are usually found in wall voids, under floors, or in various types of furniture. In homes, they are often found foraging in bathrooms or near food.